One of the most striking things about some of our study sites in the A1 (smallholder) land reform schemes of Zimbabwe is the amount of small-scale irrigation going on. This is not on schemes or in formalised group gardens, but irrigation by individual farmers, many using small pump sets and pipes.

Last year we decided to investigate this more systematically, and a recent open access paper – part of a special issue in Water Alternatives – documented the results from our Masvingo sites. A similar story (with important variations) was found also in Mvurwi, in high-potential Mashonland East, and in Chikobedzi, in Chiredzi district the dry lowveld.

It seems to be a widespread phenomenon, but emerging largely unnoticed and unsupported. If the patterns seen in our study sites are representative, this implies a very large and expanding irrigated area driven by individual initiative, largely unrecognised by agricultural and irrigation policy. This is perhaps the beginnings of a new ‘green revolution’ led by farmers.

To highlight the research, we wrote a short piece for The Conversation. In case you missed it, the article is reproduced below. 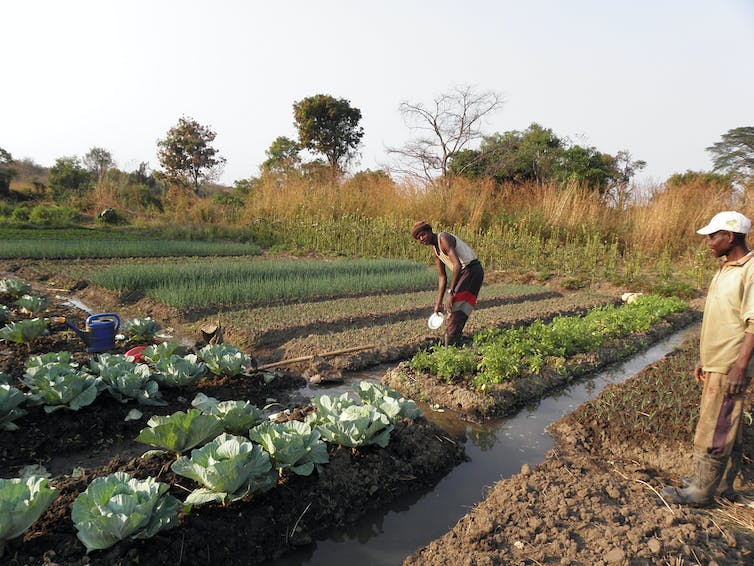 We often hear that irrigation in Africa is too limited, and that the key to a “green revolution” on the continent is to expand to levels seen in Asia. But what if there is much more small-scale, informal irrigation in Africa than we thought? Could this be the basis for irrigating Africa?

In our recently published paper, we looked at initiatives taken by small-scale African producers in expanding irrigation. We found that farmer-led irrigation comes in many different shapes and forms. Informality, flexibility and adaptability are the watchwords. Most significantly, such irrigation initiatives are led by farmers, although they also rely on networks of technology suppliers, equipment repairers, market brokers, extension agents, transporters, banks and credit agencies, among others.

This sort of irrigation was dismissed as “just gardening” by an irrigation specialist we engaged with during our study: too small to make a difference, and not geared to commercial production. Instead, engineer-designed irrigation schemes are often advocated, in Zimbabwe as elsewhere. But the history of these schemes in Africa has not been a happy one. They have repeatedly failed, as strict cultivating and watering regimes are imposed, and high-cost equipment breaks down.

Yet, such schemes remain central to development programmes across the continent, despite the disastrous record. What is the alternative? Could farmer-led systems lead the way?

In our study on land reform farms in Zimbabwe, published as part of a wider collection from across Africa, we found that farmer-led irrigation in our sites proportionally covered many times more area than formal irrigation schemes do at a provincial level. And this despite official statistics suggesting that informal irrigation accounts for under 10% of national irrigated area.

The mismatch in the figures is striking. Of course, extrapolation is problematic, but evidence from across the country suggests that farmer-led systems, across multiple small plots, is widespread. Without external support, land reform farmers use their own initiative and resources, making use of available water – from small dams, rivers, streams or wells – to boost production.

Areas irrigated range from small homestead plots to large fields. One commercial irrigator was securing an income of around US$30,000 from five hectares, with input expenses of US$12,000, and was employing some 20 people. Most had more intermediate operations, using a variety of pumping systems, whom we classified as “aspiring irrigators”, with plot sizes averaging 0.43 hectares.

Could farmer-led systems, then, be the basis for a new irrigated “green revolution” in Africa; one that is already happening?

Access to cheap technology has been essential. The price of mobile pump sets has massively declined in recent years. Made in China, available in every town, and repairable by local mechanics, such pumps can be bought in Zimbabwe for as little as US$250. Combined with flexible piping, this means that water sources can be used year-round.

Since acquiring the land in 2000, around three-quarters of those irrigating in our sites have built new wells, many of them subsequently deepened, while 85% have purchased pumps of different types. Across 49 plots, over 8km of piping has been bought in the last few years.

Because such farmer-led irrigation systems can be operated flexibly across a range of scales, available labour and capital can be matched to the production system. Some very small plots, usually around homesteads, are favoured by women, who can combine watering and tending vegetables with domestic and care work.

Young people, who did not receive plots during the land reform of 2000, are enthusiastically embracing irrigated farming as a livelihood. Without any chance of a formal job in town due to the deeply depressed economy, they are investing in farming, aiming to scale up over time. Technical knowledge, urban contacts and other skills are being deployed for successful businesses, focused on horticultural farming and trading.

At the other extreme, larger plots with irrigation systems that use submersible pumps – powered by generators and fitted to newly-drilled boreholes – are being established. These farmers have upgraded to significant commercial operations, based on contracts with supermarkets and vegetable traders in nearby towns and market centres.

Indeed, many of the irrigated plots in our sample are geared to commercial production. This is not “just gardening”. These farms are supplying regional towns, including supermarkets, with vegetables. As a video from our sites shows, this is boosting the local economy, with market traders, brokers, transporters and others all benefiting.

As irrigated agriculture expands, there are also dangers of creating market gluts. There is a limit to how many perishable tomatoes can be sold. Diversification is key and some of those in our study area are trying out new vegetables, from butternut squashes to sweet peppers. With expanded mobile phone coverage, people’s ability to negotiate contracts and supply markets in a timely way also improves.

Small-scale, flexible, farmer-led irrigation is not a panacea for the challenge of expanding irrigation and boosting production in Africa. Standard irrigation schemes will continue to be part of the answer. Yet the hidden extent of informal irrigation, led and managed by farmers, is clear across Africa.

There are challenges for sure. Opportunities are unevenly spread, with larger operations dominated by richer men. Markets are limited, and issues of product diversification, storage and processing must be tackled. Sources of water for irrigation are constrained, and sustainable use and access regulations are needed.

With the right policy framework and support – not blinkered by a narrow and outdated view of irrigation – these challenges can be surmounted. As Zimbabwe contemplates new land and agriculture policies, farmer-led irrigation approaches must be central.

Felix Murimbarimba and Jacob Mahenehene also contributed to this article.

This article is republished from The Conversation under a Creative Commons license. Read the original article. Lead photo credit: Ian Scoones

3 responses to “Is farmer-led irrigation driving a new ‘green revolution’?”