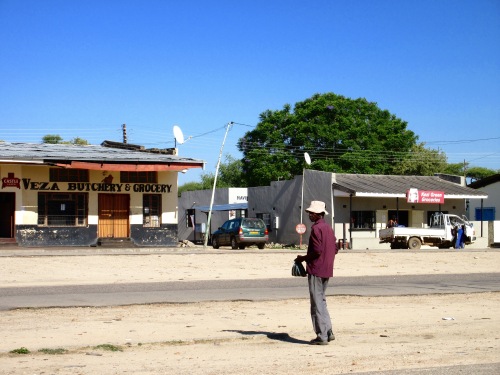 When we started our research on the new resettlement areas in the early 2000s, one of the things people frequently said to us was that they were happy about the new land and the opportunities is brought, but found the lack of basic facilities really challenging. Basic infrastructure was absent. There were no roads, and so no transport to town. There were no piped water supplies, wells or dip tanks, or at least only what was left by the former farmer. Electricity connections were few and far between. Toilets and wells had to be dug from scratch. And schools and health clinics were often several hours walk away. It was tough, and for some too much as they moved back to their communal areas. Better to live in poverty with few opportunities but with access to services, they argued. Some houses split, with kids living with grandparents in the communal areas, while the parents established the new homes in difficult circumstances.

Nearly twenty years on, things have changed. The hardships of the early years have not disappeared but the investment in infrastructure has been significant, mostly through private effort. Roads have been built or repaired, sometimes by community groups. Schools have been constructed and health clinics established, again with community input. They are poorly staffed and with limited supplies: but that is the case across Zimbabwe, such is the depth of the sustained economic crisis and the failure of the state to provide.

Today the difference between the new resettlements and the old communal areas is not so stark. Certainly in respect of privately provided services, the resettlements are in better shape, as people have invested surpluses from their agricultural production in well building, toilet construction and so on, as well as solar lights and diesel pumps.

The tables below offer an average picture across three of our communal area sites (Gutu West is missed out because the data was not of sufficient quality).

In terms of domestic water supply, the vast majority (around 80%) of communal area households have access to a protected water supply via a protected well or a hand pump. Piped water remains rare, but getting water from a river or dam is too. This is the consequence of decades of state and project investment in water supplies in the communal areas. Most of these facilities are communal and the original installation was paid for. This was a significant development achievement, particularly in the 1980s. I got typhoid and bilharzia when living in Mazvihwa communal area in the 1980s, when there was no borehole and only the river mifuku and an open well. This would be much less likely now: in these matters development does make a difference.

Although the level of coverage is approaching the same levels in the resettlement areas (unprotected, hand dug wells without a borehole are more common), these are mostly individual, private investments. Many started with a shallow well to get water at the beginning. These have been deepened, and many have had boreholes and sometimes pumps attached. Such private supply is important for domestic provision, but also small scale irrigation, which has really taken off in the resettlement areas (see earlier blog).

Such upgraded investments are expensive however, and not everyone can afford them, so there are some who have nothing and make use of shallow uncovered wells, streams or dams to provide for water. With the absence of the state, and donors and NGOs boycotting investments in the resettlement areas due to ‘sanctions’, the principles of universal provision of water supplies is not evident (the same applies to education). In service provision the dividing line between state (and donor/NGO) provision in the communal areas and private, individual provision in the resettlements is clear, with some left behind.

A similar story can be told around toilet provision. Like protected water supplies there were many donor-funded and state-led programmes around toilet provision in the 1980s and 90s. The famous Blair toilet was built everywhere. This provided a safe, sanitary toilet for everyone, and many households were beneficiaries. I was surprised by our data showing that many still did not have a toilet in the communal areas, although many share in a cluster of homes, which may account for the results. That said, a majority outside Mwenezi have a latrine at their home, and most of these are closed latrines with a roof, usually of the Blair style that prevent the spread of flies, and one in Gutu North even has a flush!

In the nearby resettlements, toilet coverage ranged from 13% in sparsely-populated Mwenezi A1 areas to 77% in Masvingo district, in sites near Gutu West. Like the wells, these mostly started as open latrines, but many have been upgraded. All again through private investment.

With very few rural electrification schemes, lighting sources are generally privately provided in both the communal and resettlement areas. The availability of cheap solar panels and batteries has revolutionised this. Outside Gutu North, which seems still to be more reliant on candles, lighting for 60-80% of households was electric solar, allowing also for the charging of the ubiquitous cell phone too. When I lived in a communal area in the mid-1980s, it was always candles for writing up PhD notes, or for the kids in our home to do school work by.

Since the 1980s, energy sources for cooking have not changed much, however, and across our sites 100% of households rely on fuelwood for cooking. In the land scarce areas of Gutu this is a challenge, especially for women who often have to travel long distances to search for fuel. In the resettlement areas this is not yet a big problem, and again fuelwood is the near universal source of energy for cooking.

Services and well-being: the costs of state failure

Service provision in rural areas affects health and well-being. Better health through better water and sanitation makes a big difference. Having electric light in the evening, and being able to charge a phone, makes all sorts of things possible. This improves the lives of many. The public investments in the communal areas following Independence made a big difference, and reduced morbidity and mortality as the DHS surveys show over time.

This sort of public support has not been available in the resettlement areas due to lack of government capacity and the ‘sanctions’ (aka ‘restrictive measures’) from donors. Instead, private investments in water supplies, sanitation facilities and energy sources have replaced state/donor provision, although not for everyone. There are some living in the new resettlements who have not made it, and are living in very basic homes with no safe water and no toilet, with kids unable to go to school, as provisions for transport over overnight accommodation are not possible.

While it is good to celebrate the initiative and entrepreneurship of the new settlers, the costs of state failure, exacerbated by persisting resistance by international actors to work in what they deem to be ‘contested areas’, takes its toll on the most marginalised and deprived. Nearly twenty years after land reform, investment in basic infrastructure and services in the resettlement areas is long overdue. The state in particular has failed in its most basic obligations, while international players in the NGO and donor community are not upholding their own commitment to humanitarianism and universal development due to entrenched political positions.

Today, a major post-land reform effort must be combined with the rehabilitation and repair of the neglected communal area infrastructure, where investment has been minimal too over the past 10-20 years, except for the few favoured project islands where NGO and donors land. As the final blog in this series argues, thinking about rural development more broadly than isolated project interventions, and as part of local economic development at a territorial level, across communal areas, resettlements and small towns, is essential. Infrastructure and services, including water, sanitation and energy, must be at the heart of this agenda.

This post is the eighth in a series of nine and was written by Ian Scoones and first appeared on Zimbabweland.

This field research was led by Felix Murimbarimba and Jacob Mahenehene. Data entry was undertaken by Tafadzwa Mavedzenge