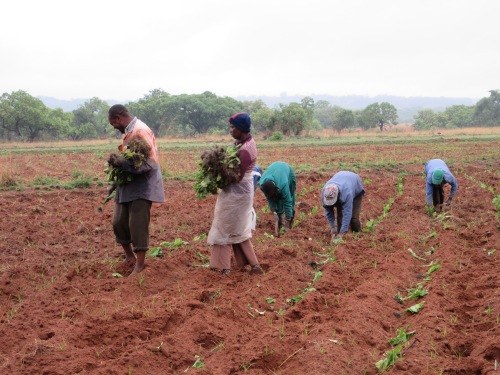 Walter Chambati, acting director of the Sam Moyo African Institute for Agrarian Studies, has probably contributed more than anyone to our understanding of how wage labour relations have changed following land reform.

His most recent paper, in the Agrarian South special issue dedicated to the life and work of Sam Moyo, makes the case that wage labour exists across farms of all scales in Zimbabwe, and is not the preserve of large-scale capitalist agriculture. Indeed, as processes of differentiation occur in the new resettlement areas, demand for wage labour – often as short-term piecework – has grown.

Based on studies in Goromonzi and Kwekwe in 2006 and 2014, the paper shows the different patterns of labour utilisation across sites and farm types. In Goromonzi and Kwekwe, 87% and 81% of A2 households hired permanent workers, with 5.5 and 2.7 hired on average. In the A1 areas, 32% and 22% households hired permanent labour, with 0.9 and 0.7 workers hired on average. Casual, temporary labour was much more important in the A1 areas, although with greater rates of hiring than nearby communal areas with around 60% of households hiring regularly.

In other words there is a vibrant labour economy in the resettlement areas, but it is highly differentiated. It also varies in terms of the conditions offered. Chambati argues that the focus on ‘work’ as paid wage work may underestimate the extent of labour hiring, as cash wages are combined with in-kind arrangements very often. Yet, he argues such ‘informal’ wage labour has a very different character and conditions of employment compared to the full and part-time labour of the past. He concludes:

“There is continuation of the super-exploitation of agrarian wage labourers that is reflected by the payment of poor wages and differing degrees of the institution of the residential labour tenancy in both the old and new farm compounds. Landlessness and/or land shortage continues to be a key characteristic of farm wage labourers as in the past suggesting the persistence of the labour reserve dynamic.”

This is an important conclusion, with major implications for policy. If land reform has simply replicated the inequalities of the past, but in a new form, then the progressive gains of land redistribution have to be qualified. A key challenge then is to think hard about how labour becomes incorporated into the new agrarian system. Not just in the precarious, temporary, informal ways described in this paper (and seen across our study areas too), but allowing labourers to have rights and so the provision of minimum conditions, as well as rights to land.

This is after all not a simple replication of the old wage labour reserve economy but a new dynamic where wage labour combines with small-scale agriculture, disturbing old class positions and identities. The old ‘farm worker’, trapped in a paternalistic relationship with a large-scale capitalist farmer, is rarer these days; instead those supplying labour to diverse new farms have different livelihood profiles and are constructing new identities, often as ‘worker-peasants’, combining part-time wage work with farming. This dynamic remains poorly understood, and varies dramatically across the country, by gender and age.

Studies of new labour dynamics and the implications for rights, welfare, livelihoods and economy remain priorities for post-land reform research and policy debate. The work of Chambati – alongside Andrew Hartnack, Leila Sinclair-Bright and others – offers some important pointers on the way forward, getting us beyond the unhelpful characterisations of much commentary.

This is the seventh in a series of short reviews of new work on agriculture and land in Zimbabwe. Nearly all of these studies are by Zimbabwean researchers, reflecting the growing research capacity and ability to comment on important issues of policy in the post-Mugabe era. If there are other papers or books that you think should be included, please let me know!