Tobacco and contract farming in Zimbabwe 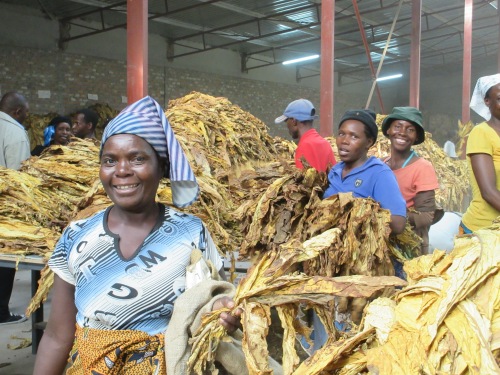 How does commercial agriculture – and particularly contract farming – affect agrarian dynamics? We have been looking at this question in work in Mvurwi area in Mazowe district over the last few years. New work under the Agricultural Policy Research in Africa project of the Future Agricultures Consortium will pursue this further.

An open access paper is just out in the Journal of Agrarian Change – “Tobacco, contract farming and agrarian change in Zimbabwe”. (PDF here). This looks at the influence of tobacco farming (both contracted and independently grown) on patterns of social differentiation and class formation within A1 resettlement areas. Tobacco production is one of the big post-land reform stories, but how is this driving different patterns of accumulation, with what implications for livelihoods, labour and politics?

Lots of data are presented in the paper on contrasting production, asset ownership and investment patterns across our sample of 220 households. Towards the end of the paper, we offer a simple typology of different classes of farmer, resulting from differential accumulation due to tobacco production.

The Accumulators: This group are those with sufficient resources to grow tobacco and sell it on their own. In the recent past they may have had contracting relationships with companies, but many have found it possible to operate independently because of sufficient resources accumulated. Tobacco income has been invested in tractors and transport vehicles, allowing households to cultivate effectively and transport tobacco to the auction floors. They balance tobacco farming with commercial maize farming, so they spread their risk in terms of agriculture. Many also have other businesses, including tractor hire and transport, but also house rental, as some have invested in real estate in Mvurwi, Mazowe and Harare from tobacco proceeds. This group is generally older, male, more educated, and sometimes with jobs in town, or at least pensions and other resources – sometimes remittances from children abroad – to draw on, which helps the path of accumulation. This group hires permanent labour, and also uses a temporary workforce hired from the locality as well as from the compounds. Links to state officials, agribusinesses and political networks become important for gaining access to some resources, notably fertiliser, and so accumulation from below combines with accumulation from above for this group.

The Aspiring Accumulators: This group includes a number with formal contracting relationships with companies. They do not have enough resources to produce and sell independently, but are prepared to commit significant land areas to tobacco to fulfil contracts, and take on the associated risk. They generally have a larger proportion of their farms allocated to tobacco, and so less to other crops, including maize. However, on average, they still manage to produce more than a tonne of maize per year, and so, even on smaller areas, have enough for self-provisioning. Many also complement tobacco production with small-scale commercial horticulture, often run by women, and so have diverse sources of income. They hire labour, both locally and from the compounds, but have a smaller permanent workforce compared to the accumulator group. In terms of off-farm income sources, this group combines traditional local occupations, such as building or brickmaking, with cattle sales, and some with small transport operations. While aspiring to greater things, this group is certainly ‘accumulating from below’, and shows a significant level of purchase of assets, including cattle, solar panels, cell phones, as well as agricultural and other inputs.

The Peasant Producers: Not everyone is accumulating to the extent of these other groups, and for some a more classic peasant production system is evident. This does not mean ‘subsistence’ production, as all are engaging in the market, but the production system features a dominance of own-family labour (although some hiring in of temporary piece work), and production that is spread across a variety of crops, including tobacco. Most in this group will not be in a contracting relationship with a company. They instead sell tobacco, often as part of a group, independently. There has been a large movement from this group to the other two accumulator groups in the past few years.

The Diversifiers and Strugglers: There are a number of households who are not producing in the way the peasant producers manage, and are clearly struggling. This group does not engage in cropping for sale (or if so very little, and not usually tobacco, but mostly maize), and often produces insufficient maize for self-provisioning. Such farmers have to diversify income earning activities, often with a clear gendered division of labour, across activities including building, carpentry, thatching, fishing and some craft making (for men) and vegetable sales, trading, pottery and basket making (for women). They rarely hire labour, and will often be the ones labouring for others, as temporary labourers on nearby farms.

These categories are far from static, and the drive to accumulate, with contracting seen as an important route to this end, is ever present, both in people’s own commentaries, as well as in observed practices. Everyone can see success around them, and tobacco is the symbol of this, although some are having their doubts about its sustainability and diversifying into other high-value crops. These categorisations of also miss the differential trajectories of accumulation within households, across genders and generations. As seen in the recent blog series, some youth are failing to make it, and often remain within increasingly large accumulator households as dependents, even after marriage. Some women may be tobacco farmers in their own right, but tobacco accumulation is predominantly a male phenomenon, with men often taking on the tobacco business, and associated investments from the proceeds.

What do these patterns tell us about likely longer-term patterns of agrarian change? The tobacco boom has provided a significant group of land reform beneficiaries the opportunity to accumulate. This has had spin-off effects in the rural economy – generating employment, resulting in investments of different sorts, and changes in the local economy as small towns like Mvurwi grow.

It has also generated class-related conflicts and dependencies both in relation to compound-based farm worker households and with others in the A1 areas who are struggling to reproduce. The weak kin-based social relations within new resettlement communities limit the redistributive effects of a ‘traditional’ moral economy, and means that there are genuine losers, as well as winners, from the land reform.

There are inevitable limits to accumulation, set by environmental factors (and especially the supply of wood for curing), market conditions (and changes in the world market, health concerns, the demand for higher quality leaf and price shifts), social-political relations (and the ability to negotiate within markets), and limited land areas.

In the A1 areas, successful households attract others, particularly from the communal areas, and household sizes expand as others are taken in. Surplus income can be invested in basic social reproduction – including maintaining rural homes, investing in education, health care, marriage of children and so on – as well as production – including livestock, farm equipment, inputs, transport and so on – but again there are limits to the herd sizes and capital items and other inputs that can be bought.

A key question will be where the next round of investment will end up. Here the relationship between countryside and towns, especially small towns, becomes important, as accumulators build urban/peri-urban housing for rent, private schools as business ventures, and sink capital into other urban-based businesses, potentially a source of employment for the next generation. This is only beginning now, but the data show that this is a trend to watch.

These economic transformations also feed into and are built upon social and political dynamics. Successful A1 farmers – very often well educated, and with links to urban areas – are important social and political actors, often seen as leaders in local political formations (mostly within the ruling party, ZANU-PF), but also in other groupings, such as churches and business associations. How alliances are struck with farm workers – in all their forms – as well as those A1 farmers who are struggling will be significant, as new forms of agrarian politics emerge on the back of the tobacco boom.

A new paper in the Journal of Agrarian Change by the team that wrote the Zimbabwe’s Land Reform book examines the processes of rural differentiation that have occurred following land reform in 2000, and their political and economic consequences.

The paper points out that “acquiring land through reform processes… and allocating it to a mix of largely land and income poor people from nearby rural areas is not the end of the story. As new livelihoods are established, investments initiated and production, business, trade and marketing commence, processes of differentiation begin – within households, between households in a particular place and between sites”.

A simplistic, populist back-to-the-land narrative is therefore insufficient. Rural economies are always dynamic – some win, some lose. So what happened across the 16 sites studied over a decade in Masvingo province?

The story is interesting – and complex. The paper shows how, among 400 households, 15 different livelihood strategies are observed, classified into four broad groups (stepping up, stepping out, hanging in and dropping out, following Andrew Dorward and Josphat Mushongah). These can be broadly associated with rural classes. These include an emergent rural bourgeoisie, and a larger group of petty commodity producers doing quite well by stepping up through agricultural production and stepping out through diversified livelihoods, and often a combination of both. There are worker-peasants who farm but also sell their labour, and the semi-peasantry who are struggling.

Linking the diversity of livelihood strategies – what Karl Marx in his treatise on the method of political economy called ‘the rich totality of many determinations’ focusing on real life on the ground – and broader patterns, tendencies and class formations (‘the concrete – the unity of the diverse’) is not an exact science, but the paper makes an attempt.

Why is this important? First, it is vital to realise that the new resettlements are not static or homogenous. The instability of class formations, and the overall fluidity of social and economic relations is emphasised. Efforts to support the new resettlement areas must take this into account. Who to back? The new emergent middle farmers or the poor and struggling? Second, the dynamic formation of class – cross-cut by differences of gender, age and ethnicity – has implications for political dynamics in the countryside. Again, who will have the political voice in the future? Will it be the ‘chefs’ who are small in number but who have grabbed land, or a larger group of emerging farmers who are doing well? And will workers, poorer peasants and others ally with them in pushing for a better deal?

These political dynamics are discussed at the close of the paper. Much is speculation, but informed by an understanding of emerging patterns of socio-economic differentiation. If political parties in forthcoming elections want to know a bit more about their constituencies, then the paper offers some food for thought.