Empowering chickens: why Bill Gates’ plan may be flawed 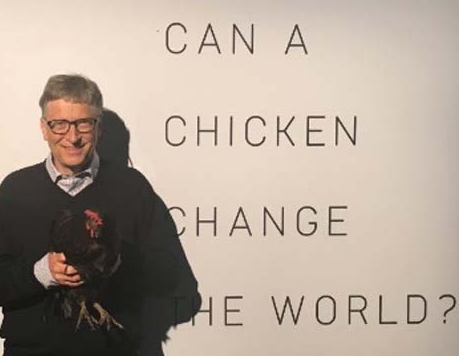 Are chickens the route to rural women’s empowerment? Bill Gates thinks so. In a recent Gates Notes comment piece he announced ‘a big bet on chickens’ with an initial distribution of 100,000  to rural women in Africa. With just 5 chickens, he argued a woman could earn $1000 in a year. Melinda Gates meanwhile emphasises the empowerment angle, arguing in a blog that “raising chickens is considered women’s work, and the money from selling chickens and eggs belongs to women to spend as they choose”.

Simply handing out chickens and expecting these to improve livelihoods is of course not so straightforward. That is a big income from an initial 5 chickens! There have been many well-meaning projects that have done the same over many years. The relationship between poultry, disadvantage and empowerment for women is complex.

As Joseph Hanlon and Teresa Smart point out for Mozambique commercial poultry production is a costly business. Successful businesses require basic infrastructure, veterinary care, assured supplies of day-old-chicks and effective markets. Few manage this, and as our profiles of new agricultural entrepreneurs in Zimbabwe, the new poultry producers must rely on established businesses and services for support, and not all the beneficiaries of such enterprises are of course women. Most rural people rely on a few chickens of local breeds that require little maintenance and provide an important source of nutrition and income, but not sufficient for economic empowerment, by any stretch of the imagination. 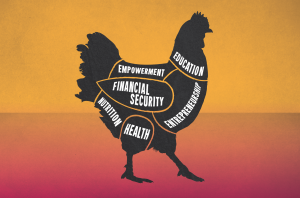 In our surveys across the resettlement areas, nearly every household has a few indigenous, village chickens. These are widely used, but do not provide a stable or significant income. Across 400 households in our A1/A2 sample in Masvingo province, we found 16 new broiler operations, but only two of these exceeded the $1000 profit level being suggested by Bill Gates; most made about $500 profit and many much less. These were 50 to 100 bird operations, reliant on significant and expensive inputs, not available to most women, except in the few cases when they were organised in groups.

Hanlon and Smart contrast the Gates NGO model with that of Brazil. In the last few decades, Brazil has become a major producer and exporter of chickens. Frozen chicken cuts from Brazil undercut local production in many parts of the world including Africa. The Brazil model, heavily invested in by the state investment bank, BNDES, relies on large producers of chicks, and a major support network established through contracting arrangements with small-scale producers. This realises massive economies of scope and scale, which are very difficult to replicate in African settings.

In Zimbabwe, large-scale commercial farmers are often crucial links in the value chain in a fast-changing commercial poultry sector. In Masvingo for example, the Mitchells’ farm supplied day-old chicks to many farmers, and continues to do so across the communal and new resettlement areas, despite attempts at land grabbing. The presence of such an operation, with all the infrastructure, skill and market connections that it requires, has been crucial to the success of the medium-scale new entrepreneurs that we profiled. As Hanlon and Smart argue:  “As usual, the aid industry can only see the two extremes and ideas that come from outside – Bill Gates’ five hens or Odebrecht’s [a Brazilian company] millions of chickens. The successes in the middle, and the successes developed locally, are ignored”.

Bill Gates and his team have to understand the changing global political economy of poultry production in their announcement, as well as the range of enterprises that actually exist. As Jim Sumberg and colleagues point out for Ghana there are many competing narratives about the role of poultry production in economic development. Too often the NGO vision – often tied to naïve ambitions of local economic empowerment – dominates but does not match the facts on the ground.

Major evidence gaps exist in the debate, and the Gates proposal has fallen foul of these. In Ghana, as elsewhere, we simply don’t know how many chickens there are, and in what sized flocks they are being kept. There are confusions between a generic ‘chicken’, and different types – broilers, layers, and the ubiquitous ‘road runner’ chicken, seen in villages across the continent. Each require different inputs, feeds, management care, and levels of capitalisation, and they usually operate in very different markets. ‘Indigenous’ chickens are valued for taste, ritual slaughter and other uses; broilers and the ‘improved’ breeds that the Gates Foundation are distributing do not cut it.

Patterns of consumption of meat are changing too, with chicken often favoured over for example beef, due to cost. But it is the very cheap imports (from Brazil in particular, but also Europe and the US) that have driven this in urban areas, along with the opportunities that supermarkets provide for frozen products. This is not the vision of the mini flock of village chickens owned by newly empowered women. In Ghana as elsewhere, policy is confused and conflicting, as different interest groups compete, but often with a poor understanding undermining any pretence at ‘evidence-based’ policy.

Empowerment of course is a political process. It’s about recognition, rights, voice and participation, not just about chickens, and new sources of income. Empowerment must also challenge the wider structural political-economic factors that keep poor people poor, and women disenfranchised. Cheap frozen chicken from Brazil will not go away as long as free trade regimes and cheap oil allow transnational value chains that can often undercut even the most diligent producers in rural Ghana, Mozambique or Zimbabwe. As we’ve long learned, giving women new assets without the requisite changes in gender relations and shifts in power relations in the domestic economy, can result in intra-household struggles, with men often benefiting more than women.

Easy gestures from rich philanthropists are insufficient, and must address these wider issues if the highly commendable focus on poorer rural women and their empowerment is to be addressed. Handing out chickens may not be the simple solution that it first appears.

Zimbabwe’s poultry industry has shown massive growth since 2009. A range of sizes of units have sprung up everywhere – from the medium size units of 1000 birds to massive industrial scale operations. Chickens are big business.

Meat consumption has changed significantly in Zimbabwe over the last 20 years. Beef used to be the most consumed, with Zimbabweans eating on average 13kg per annum in the 1980s. According to a recent USAID report (see below), today this has dropped to only 3.3kg, the lowest in the region. Chicken and pork in particular have replaced this, with chicken consumption is now half of all meat consumed. Beef has dropped to only 35%. Meat consumption has rebounded since 2009 as the economy has improved, now estimated to be 11000MT per month, up by 20%. But the pattern of consumption has changed. This has been driven in part by taste, but also austerity as people looked to cheaper sources of protein. According to the USAID report, the retail price of economy beef which has the highest demand is between US$4.60 – US$5.00 per kg compared to the average chicken retail price of about US$3.30 per kg.

After the stabilization of the economy, many invested in poultry as a sure-fire way of making money. The data in the graphs below are from a recent World Bank report, showing the rapid increase in both broilers and layer production of day old chicks, according to Ministry of Agriculture (MAMID) data.

But there are significant challenges to these new producers.  These centre in particular on competition from cheap imports, including illegal dumping. ZIMSTATS shows that in 2011 chicken imports were 25,500 MT at a value of $13.644 million or an average of only $0.53/kg. The low price suggests much of this is offal (including ‘waste’ pieces), which is illegal to import. Additionally the volume exceeds the official quota by over 100%, representing 20% of the total demand for chicken nationally, according to a recent USAID report (see reference below).

In addition the costs of feed have escalated. Soya production has been slow to rebound in Zimbabwe, and imports are costly as only Zambia produced GM-free soya in the region. These imports are expensive as Zambia tries to protect its own growing poultry industry. This really took off when Zimbabwe was suffering outbreaks of avian influenza in the early 2000s, and then subsequently when the Zimbabwe economy collapsed, and along with it its poultry industry.

The 2013 budget statement laid out the challenges for the Zimbabwean industry clearly:

• Stiff competition from cheap imports for both table eggs and meat, threatening viability of producers;

The USAID study highlighted the challenge of cheap and illegal poultry imports for the meat industry as a whole. Much of the imported poultry meat comes from Brazil which has a massive poultry industry. Products that cannot be sold in the Brazilian markets are often transported elsewhere in the world. Feet, skin, necks and other ‘offal’ are frozen and packaged and sold at rock bottom prices. Chicken pieces too are packaged and sold, again at highly competitive rates. Go to any Zimbabwean supermarket and you will find 1kg of chicken pieces being sold at $3, sometimes considerably less.

How these prices can be so low is beyond me. Maintaining a cold chain from Brazil to Zimbabwe must cost a fortune, let alone the cost of the product and its processing and packaging. While there are import quotas, many believe these are being exceeded through illegal imports. The import of offal is also illegal due to health and safety concerns. The USAID study recommended tighter import controls and the banning of offal imports, arguing that cheap imports were not only damaging the poultry industry, but also the beef industry as cheap meat alternatives were suppressing demand.

This is not just a Zimbabwean problem. In 2012, the South African government slapped on surcharges, provoking a row with the Brazil. Brazil responded by taking the dispute to the WTO, claiming that the South African’s protectionist actions were threatening the new friendship developed between the nations as a result of the BRICS partnership. It seems the diplomatic heat, and the threat of a WTO case that the South Africans have backed down, at least for now.

Undeterred by this dispute from across the border, Zimbabwe has now responded to the same problem. The 2013 budget statement noted:

“Due to unfair competition from imports of chicken, local breeders are increasingly cancelling orders for day old chicks as they fail to secure customers for their chicken as imports from outside the SADC/COMESA region retail at prices significantly lower than locally produced chicken, notwithstanding the 40% duty levied on imported chicken…. Investigations indicate that chicken imports are either smuggled or are grossly undervalued for duty purposes. In instances of smuggling, the necessary veterinary and health hazard permit controls are undermined….”.

From mid-November, the government introduced a higher customs duty “in order to level the playing field between imported and locally produced chicken”.

This is an important and welcome move. Let’s see if it has the effect it needs to. Hopefully the Brazilians will be less heavy-handed with Zimbabwe where the market is much smaller, and a trade dispute can be avoided.

Unfortunately, the issue is not just about formal trade. As already noted it is perhaps the illegal trade which is most significant, and damaging. This is well embedded in local Zimbabwean business networks, sometimes with high-level connections, and veterinary control and customs enforcement capacity remains weak. While chicken smuggling is perhaps less dramatic than drugs or diamonds, it has just as devastating an effect on the economy, lives and livelihoods.